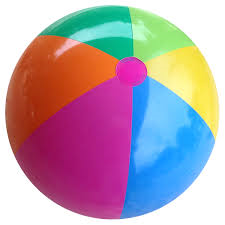 Balloon Basketball
Use laundry baskets or large waste baskets as the "goal". Divide into teams and play like regular basketball. Balloons must stay in the container for points to be scored. Minus 2 points for broken balloons. Be sure and have ample balloons blown up and ready to use, as many will be popped during play!

Behind the Back Ball Pass
Divide the children into two teams, standing facing each other. All children put their hands behind their backs, palms up. The leader gives each team a tennis ball, by placing it at the feet of the first team member. At the signal, the first players pick up the ball and pass it behind their backs, hand to hand. If a ball drops, it may be retrieved. After each round, the first child moves to the end position.

Crazy Soccer Using A Beach Ball
Divide the children into two teams. Write a number on each child's hand. Select the child from each who has a #1 to be goalie. Mark off a goalie "box." The goalie may not move out of this area. Call the children who have the highest number to come to the center to start the game. The
leader tosses a beach ball in the air. The object of Crazy Soceer is to bat the beach ball across the playing area to the goalie who must catch it to score a point. After the point is scored, both goalies become players. The children with #2 on their hands, now become goalies. The only rule is the ball may not be grabbed, only hit.

Heel to Toe
Draw a chalk line on the floor in front of each team. Players place the heel of one foot against the toe of the other and walk to go line and back in this manner.

Oops! That's Okay
Divide children into sides. No net is needed. A beach ball or heavy-duty balloon can be used. The
object is for each team to keep the ball from touching the ground by batting to the other team. When the ball touches the ground, everyone hollers "Oops! That's okay!" The opposing team gets 10
points and the ball continues where dropped. 100 points is a game.

Shoebox Shuffle
Each team has two shoe boxes. On signal, the first player places both feet in the boxes and shuffles to the goal line and back.

Speed Ball
Divide the group into 2 equal circles. Give each group 3 balls (same size and type). The object is to pass the balls around the circle at the highest speed possible. Whenever someone drops a ball, they leave the circle. At the allotted time, the team with the most players left wins.

Tennis Ball Toss
Children line up in two straight lines, parallel to one another. To start, each layer should be able to reach across and touch his/her teammate. At signal, players toss a tennis ball to their partners. With each catch, players move back one baby step. The winners are the team who never drop their ball.

Water Balloon Toss
Fill up enough small balloons with water, so every two pupils has a balloon. The children line up in two parallel lines, facing toe-to-toe with their partner. Every time the leader says "Back up", both children take one foot step backwards. Pretty soon the teams will be far apart. The object is to see which two are the last with a balloon still full of water!
Posted by BETTY BENSON ROBERTSON

Children's Ministry Ideas Unlimited
Valuable information is offered for those ministering to children and desiring to make a lasting difference in these precious lives. Sunday School teachers, mid-week volunteers, children's church staff, children's pastors and directors, day care personnel and homeschooling parents will all find a wealth of information.